Born in the city of Kachirho, Wrrlryyhn was, as most other wookiees were, raised in the nursery ring. Even at such a young age, she stood out among the other young females as she engaged in the rough-and-tumble play of the male children. Afterwards, she would return home to her mother and father. Besides the regular chores that wookiee children were expected to perform, her mother, Isshanta, taught her of the healing arts while her father, Shortobuck, showed her how to play the yykrn, a wookiee string instrument that made use of the silk fibers of the syren plant. Young Wrrlryyhn developed a passion for the arts, specifically music and stories, alongside a keen interest in medicine. 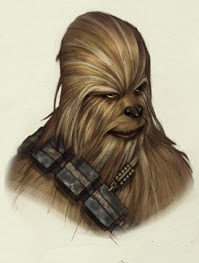 Within wookiee society, young males went through rites of passage to prove they had become adults. The most common of these practices was the gathering fibers from the carnivorous syren plant. Her older brother Chewkazza completed this ritual and, brat that he was, lorded the accomplishment over his sister. Despite her parents warnings and eventual pleas, Wrrlryyhn decided that she was just as capable as Chewkazza and so, armed with her father's bowcaster, descended into the lower levels of the forests to find one of the syrens.

Instead, the adolescent wookiee stumbled across a savage katarn. Before she could slay it with the bowcaster, the beast knocked the weapon from her hands and she was forced to rely upon her natural strength to wrestle the creature to the ground. Wrrlryyhn was thankful for the many lessons on the biology of the native fauna, the knowledge giving her the edge she needed to strike the animal's weak points and subdue it. Wrrlryyhn decided that she preferred defending herself with her hands rather than a large and unwieldly blaster. When she returned home, it was not only with the fibers of the syren plant, but also with the hide of a vicious katarn, more than enough to put her boasting brother to shame. 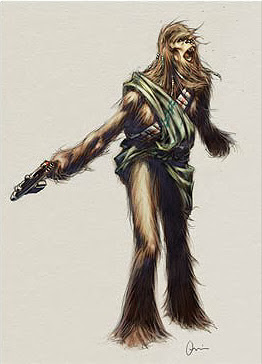 When she was old enough, Wrrlryyhn began proper training in the healing arts, learning not only of standard medical procedures practiced throughout the galaxy, but also of the more native treatments involving various plants, herbs, and the leaves and sap of the wroshyr tree. While her musical studies faltered, she proved to be a quick study when it came to the practice of medicine. Her teachers were rather surprised by the speed with which she grasped the often complicated subjects. Some of this was due in part to the fact that her mother had taught her quite a bit already, as well as her rather keen and intelligent mind.

After finishing her Kashyyyian medical training, Wrrlryyhn served for several years as a healer in the city of Rwookrrorro before deciding to move on. While the work was rewarding and sometimes even taxing, her desire to learn had not been sated. She decided to leave Kashyyyk to continue her studies elsewhere, visiting some of the most prestigious medical schools in the galaxy where she would spend decades, first learning and then teaching. During that time, Wrrlryyhn developed an interest in various styles of unarmed combat, dabbling in her spare time and creating a mixture of techniques combined with medical knowledge in a potent style that was all her own. 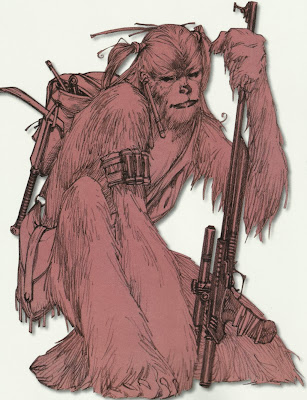 When Wrrlryyhn eventually returned to her arboreal homeworld, she brought with her all number of interesting stories about her journeys, as well as a few medical advances that were quickly disseminated amongst the various schools of healing. She even taught what she had learned of hand to hand combat to those willing and capable of learning. She was on the verge of achieving the status of Elder in Kachirho before the Republic's war with the Separatists made its way to Kashyyyk. With her unusual training and aptitudes, it was no surprise that Wrrlryyhn served as a combat medic during the droid army's invasion, on the front lines repelling the enemy even as she tended to wounded wookiees and clone troopers alike.

Like so many of her people, she was caught off-guard by the sudden betrayal of the clone soldiers. Before she knew it, Kashyyyk was under attack by the very people whom she had fought alongside. The wookiees fought a long and desperate battle but they simply weren't prepared for the overwhelming forces of the newly christened Galactic Empire. Wrrlryyhn had fled back to Kachirho to gather her family and had managed to gain passage onboard a ship that was attempting escape. Unlike the other transports that were fleeing the Empire, one of the wookiees aboard this one had been a member of the Claatuvac Guild, carrying knowledge of secret hyperspace routes which were used to help them escape Imperial forces. Even still, Wrrlryyhn was agonized by the sight of so many transports captured or destroyed by the Emperor's fleet. 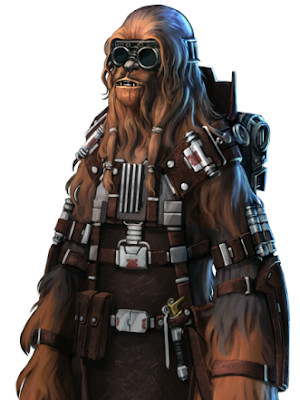 They eventually managed to find safe haven on the Outer Rim planet of Voss. While still under the Empire's control, it was beneath its notice. However, Wrrlryyhn was not content to simply hide for the rest of her life. Rather than remain on Voss, she left to continue her work as a healer. It wasn't easy, moving from ship to ship as she was forced to avoid Imperial detection. However, fortunately, the wookiee had a chance encounter with the Herglic by the name of Sid Ybom. The Tapani Knight was in need of someone with medical training to serve on his freighter and, in return, he would 'purchase' her as an indentured servant, allowing her freedom to roam without being targeted by Imperials or bounty hunters.


Since then, Wrrlryyhn has been doing a satisfactory job as one of Honest Sid's medical officers, though she finds the work of treating minor bumps, bruises, and occasional illnesses less than fulfilling. As a result, she's taken up playing the yykrn again. With most of her time spent aboard traveling freighters, she rarely has opportunity to visit her family, but she makes the effort when she can. Still, more than anything, the doctor wishes that her job offered her a bit more excitement.
Posted by HollowerFollower at 12:32 PM

HollowerFollower
A 20-something asthmatic gamer, still trying to figure out what to do and, more importantly, why to do it.